But one of the main reasons is that I have lost touch with Steve.  Steve was not an old friend or a work colleague.  He was not a music reporter for some hip website, publication or YouTube channel.  No, Steve was just an employee of a record shop I used to frequent in Seattle, Silver Platters, at their old South Center location.  I didn’t really know Steve. In fact the time that I ever spoke with him was when he happened to be the cashier that rang up my purchases at the front counter.

Even though we exchanged few words, he did communicate with me and significantly influenced my musical tastes and my purchases.  You see Silver Platters used to have a display located at the front of the store that featured music that the staff members were listening to.  Over time, I came to realize that of all the staff members, Steve had musical tastes that paralleled mine the closest.  If Steve recommended a cd (this was the early 00s), I would buy it.  I was never disappointed.  I miss Steve and his musical recommendations.

So, why this trip down memory lane?  Well, I was reminded of Steve when I was in the Portland Amazon store today.  Amazon has there own version of Steve.

Rather than having a few employees at Amazon HQ electing books to recommend, Amazon data mines their customer order data to come up with recommendations based on buying patterns of their customer base.  If people bought one book, then bought another (in significant numbers), Amazon recommends it.

Given the sheer quantity of customers buying books from Amazon, this is among the greatest crowd sourcing around. Of course, Apple does the same thing with its music recommendations.  In my experience, anecdotal as it may be, while I have regretted the book that I originally meant to purchase, I have never regretted buying a recommended book. 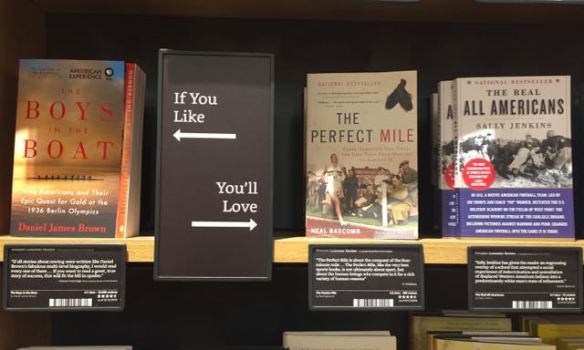