Having traveled to Paris a number of times in the past, my wife and I have already visited most of the key tourist attractions from Notre Dame to the Eiffel Tower.  But in all of our time in Paris, we never thought to visit any bicycle shops.  Since we are both avid cyclist, we realized this was an oversight that need to be rectified on our recent trip.

Alex Singer was our first shop to visit.  To be honest, I was not seeking out legendary service but rather to see one of the last shops of an era that is dying out, the era of the constructeurs.

“During the “Golden Age,” small makers built amazing bicycles that transcended their function to become a form of art. Their craftsmanship was not limited to the frame, but included hand-made derailleurs, brakes, stems, racks and other components. The entire bicycle was carefully designed and crafted as a unit, combining function and beauty. Famous makers like René Herse, Alex Singer, Jo Routens and others spent countless hours on each bicycle in their search for perfection.” -Jan Heine from Bicycle Quarterly 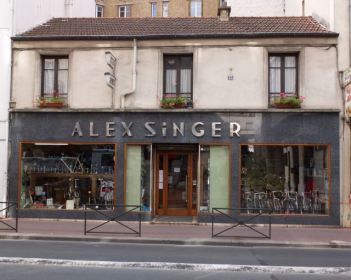 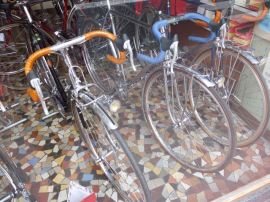 Bicycles with custom stems and racks

Hammered fenders and other goodies 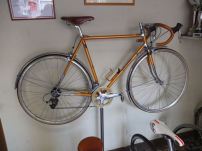 The cockpit of a newer model

No register, just hand addition on a scrap of paper and a cash drawer

Custom cassette or freewheel anyone?

The sanctum sanctorum, where the bikes are built

Made in Paris Exhibition

Alex Singer Bicycle at Made in Paris Exhibit

Detail from Alex Singer Made in Paris Bicycle

We spotted the shop mid-block; it is  hard to miss with its classic Art Deco styling unchanged since the late 1930s.  This was not some strip mall shop or seasonal pop up.  The shop was designed and built to last.

The front of the shop featured two large display windows flanking the front door.  The windows were filled with an assortment of Alex Singer bicycle and cycling accessories.

Sprinkled among the gear were some Singer branded promotional items. After all this is a shrine sought out by fans of classic bicycles who want a memento to recall their visit.

No register, just hand addition on a scrap of paper and a cash drawer

As the door of the shop opened, an old school bell announced our arrival to an employee we could hear shuffling around in the back.  The shop was quiet on this Thursday.  The employee came through the door to the back dressed in a blue workman’s coat smiling and offering the obligatory “Bonjour” which drew our response, “Bonjour.”

Unfortunately, that is about the limit of my French speaking skills.  Fortunately, my wife was raised in Montreal and serves as my interpreter.  She offered an explanation of our visit from the U.S. while I wandered the shop.

It was amazing to see bicycles that had been featured in The Golden Age of Handbuilt Bicycles displayed along side new bicycles.

The walls were decorated with photographs from books on the history of cycling.  One of the photos that caught my eye was of a couple riding a tandem through a steep corner.  The photo featured Ernest Csuka and his wife Leone competing in a citizens race called the Poly de Huizingen held near Brussels Belgium in 1954.

Ernest was the nephew of the shops founder Alex Singer who left his training as a pharmacist to join the shop in 1944 just six years after Alex had opened his shop.  Ernest would take over the shop in 1962 when singer retired.  While he “retired” himself in the 1990s passing the shop to his son, Oliver, Ernest continued to putter around the shop until he suffered a stroke in 2008.  In fact, until his stroke at age 80, Ernest rode the above bicycle on most weekend rides with his club.

I continued to look while my wife talked with the keeper.  It is only in hindsight that I realize that I did not take as many pictures as I thought while I inspected the bikes and checked out the other products from exotic and unfamiliar brands (at least for an American).

Momentos of the visit

While our host was gracious in answering our questions and responding to our compliments, you could tell she was anxious to get back to the shop area to continue her work. It is not out of character for a bicycle mechanic to favor working on bicycles over working with customers and bike shops the world over take advantage of the quite weekdays to do most of their work so they can attend to customers on the busy weekends.

So we selected our own mementos from the visit and made our purchases before bidding the shopkeeper “Merci, Au revoir.”

As we headed off down the street with our new treasures in hand, down the block we happened by one of the numerous small parks that dot the neighborhoods of Paris.  When I read the name, I stopped in my tracks which only served to confuse my wife.  She asked, “Why did you stop?”

I pointed to the nameplate on the gate and explained  that it seemed only fitting that across the street from one of the great post WWII bicycle shop would be a square dedicated to one of the great post-war French cyclist, Louis Bobet. Bobet was the first rider to win the Tour de France three years in succession.  What a great way to end our visit.

Several days later we were reminded of the role that Singer Cycles had in France when we visited an exhibition at the Hotel de Ville “to salute the creators and artisans who continue to settle in Paris.”   There on the wall near the entrance was a bicycle proudly displaying the nameplate Alex Singer.