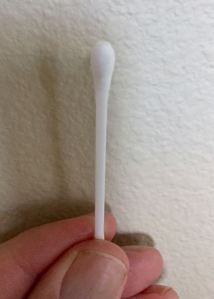 Several years ago, I saw a fascinating TV show on retailing. If my memory serves me correctly, it was called Buyology.  One of the most interesting segments reported on the stress of shopping and Holiday shopping especially.

When you are under significant stress, the body creates the steroid, cortisol, to help you deal with  the situation.  It is your body’s chemical behind the “fight or flight” mechanism.

Another characteristic of cortisol is that you can test a person’s cortisol level using a simple oral swab, so researchers went out and swabbed people’s mouths during stressful events to measure the stress caused by certain events.

The researchers tested combat pilots; it seems they have high stress levels in when being shot at.  (Only a governmental program would spend a lot of money to find that result.) They also tested Holiday shoppers at a major mall the weekend before Christmas.

The researchers discovered that some shoppers had cortisol levels as high as combat pilots.

Okay, so shoppers this time of year are stressed, everyone knows that.  Well, what most sales associates are unaware of is what the stress does to the customer.

Stress elevates cortisol and elevated cortisol leads to several interesting conditions.  First, it impacts memory and recall so it makes your customers forgetful.  Second, it hinders higher thought process.  The idea that when our ancestors were faced with a sloth bear, the ancestor needed to fight or fly and not suffer from analysis paralysis in the situation.

The bottom line is that many of your customers will be stupid and forgetful when shopping with us this Holiday season.  So give them a break.  Makes sure you and your employees are extra patient during the Holiday season.  After all, it is the drugs that are talking.