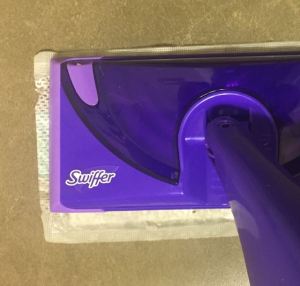 It seemed only fitting that, unlike the sunny day when I went in to buy my Swiffer Wet Jet, the day I went back to return it,  was rainy and cold.  I generally do not like returning products (even though the store was at fault in this situation).  Maybe that’s because making a return reminds me that I failed at my first attempt at a purchase.

I was prepared for the worst given how many stores deal with returns.

When I walked back into the store, I was relieved to see my cashier from yesterday was working and thankful that the store was quiet. Figuring that I could make the exchange process simpler, I went to see if the store had gotten more Wet Jets in in the previous 22 hours.

Arriving at the display, I found four new packages in stock and when I picked up a new box, I immediately realized the difference. This new box easily weighed twice as much as the box I was returning. With both the old and new box in hand,  I headed back up front to the cashier.

Relieved to see that there was no one in line, I stepped right up to the cashier.  And just like yesterday, she greeted me warmly.

“Good morning.”  Seeing the two boxes and receipt in my hand, she quickly added, “Is there a problem I can take care of?”

“I need to make an exchange,” I answered.

“I can take of that,” she responded.

At this point, we were off to a good start. I would not have to go to another area of the store to make an exchange nor would she have to get a manager to deal with the issue.

I continued, “The Swiffer I bought yesterday was used, broken, filthy and missing parts.”

The warm and friendly look quickly left her face; replaced by a look of sincere concern. She did not get defensive or start to interrogate me, behaviors I often see when making a return.

“I am so sorry about that. Returned items are not supposed to be restocked. My apologies. Let’s take care of your exchange.”

Taking the Wet Jet that I was returning, she set it aside, scanned my receipt and quickly printed a credit slip. While I was signing the credit, she took a marker and wrote on the returned box in big red letters, Defective, do not restock! “There, hopefully this won’t happen again.”

Next, she rang up the new Swiffer and tendered the credit. Handing me my receipt, she said, “ I am really sorry about the problems and I hope you will come back again soon. Enjoy the rest of your day.”

I was in and out of the store in less than 5 minutes. The cashier took care of the exchange quickly, efficiently and professionally. She apologized for the issues, did not deflect responsibility and, in spite of a bad situation, she invited me back.

I will continue to shop there happily.

If I saw this interaction as a manager, I would recognize her handling of the exchange. It is easy to get flustered when faced with such a situation and to get defensive. She did neither of these.  The cashier handled the process professionally while being personable with the customer.

I would urge her to keep handling exchanges the same way.